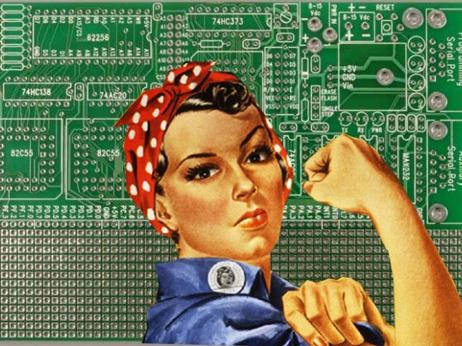 In the early 21st century, the number of women graduating in science was rising in all the areas except in computer science. This gender gap is partly because historically many women’s contributions to science have not been recognized, as well as the comparative lack of female role models in the technology industry.

Today, women represent less than 20 percent of technology jobs in the United States, even though they constitute more than half of the U.S. workforce. Worse still, women now have a lower proportion of jobs in computer science than in the 80s.

One of the main reasons women have left their IT jobs is a lack of professional growth, which is strongly linked to sexism. According to a survey conducted by The Guardian, 73% of the workers in the technology industry agrees that the industry is sexist.

However, as technology companies seek to resolve talent crisis, some companies have been implementing initiatives to shape the future of the technology industry, these initiatives include the recruitment of more women.

Recognized as the world’s first computer programmer. In 1842, she wrote the first algorithm for processing numbers on the first general-purpose mechanical computer or analytical engine by Charles Bannage who, impressed by her mathematical skills, referred to her as “the enchantress of numbers”. The computer language ADA bears her name.

Known as the mother of COBOL, she is one of the most famous pioneers of computer science in the United States. In 1944, Hopper was one of the first programmers of the electromechanical computer Harvard Mark I. Later, in 1952, she developed the first compiler. Hopper popularized the concept of the machine-independent languages that drove to the development of one of the first modern programming languages, COBOL.

Graduated with a master’s degree in mathematics in 1949. In 1961, she became manager of IBM’s Programming Center in Boston and oversaw the development of FORMAC (Formula Manipulation Compiler), the first widely used general language and the first to manipulate algebraic expressions of voltage.

One of Hollywood’s “Golden Age” stars co-designed in 1941 a radio-guided torpedo system based on “frequency hopping” (signal frequencies changes to avoid electrical interference by enemy devices) that became known as spectrum propagation, which later became a key element in the anti-interference devices used by the U.S. military’s satellite communications control systems, as well as a key element of digital wireless mobile phone technology.

The head of the observatory, Edward Charles Pickering, needed someone to calculate astronomical numbers to calculate relationships and effectively measure the universe. Pickering asked his maid, Williamina Fleming, to work as a “computer” at Harvard. Fleming agreed, leading a team of more than 80 women who did the computational work that is responsible for how we understand the universe today.

African American mathematician whose orbital mechanics calculations as a NASA employee were key for the success of America’s first and subsequent manned space flights. In 1970, she worked on the Apollo 13 moon mission. When the mission was aborted, Johnson’s works on backup procedures and charts allowed the crew to return to Earth safely.

Former astronaut, current director of Johnson Space Center, and pioneer of spacecraft technology for having designed optical systems for Sandia National Laboratory. She also developed a computer system designed for aeronautical expeditions at NASA’s Ames Research Center. Also, she was the first Hispanic woman in space.

Was the first woman to obtain a doctorate in computer science and was present at the development of BASIC computer language in Dartmouth. Before Sister Mary, Dartmouth was considered a place of study and work “for men only”.