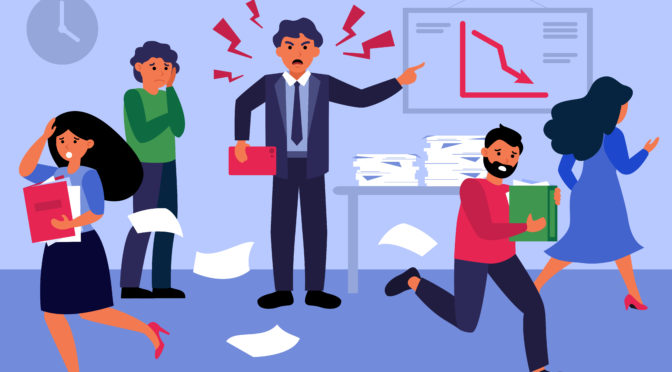 Psychosocial risks arise as a consequence of deficiencies in the design, organization, and management of work. When it comes to working, the term “psychosocial risk” refers to aspects concerning the social environment and the design and management of tasks that can be potentially harmful to the worker. Both on a psychological and physical level, such as work-related stress and musculoskeletal disorders resulting from long-term stress.

Psychological risk situations and prolonged work can lead to significant consequences related to the physical and mental health of the worker, such as cardiovascular disease or musculoskeletal disorders, as well as anxiety and depression. As for the consequences for the employer, they are low performance, absenteeism, presenteeism, an increase in the rate of accidents and injuries in the work environment. Also, work-related stress may contribute to increased early retirement rates.

Some examples of working conditions that involve psychosocial risks are:

Excessive workloads. It is one of the most stressful risk factors for workers. It refers to overwork, having to do the job quickly, without rest, and in a limited time. In other words, intense work that requires a lot of physical and mental energy, and tasks with too strict deadlines, in addition to the pressure of working compulsory overtime.

Contradictory orders and lack of role clarity. The worker may express difficulties or doubts about the job they hold, the role they should play, or the degree of responsibility they have. A clear example of this is the phenomenon called role ambiguity, which happens when the worker does not know the company’s expectations from them since their role is not clear. And, therefore, they do not know if they are doing the job correctly.

Disorganization. Labor management with undefined and chaotic objectives, lack of communication between staff members, and lack of support.

Job insecurity. It may be that the work is temporary, that it creates a sense of uncertainty in the individual, that it is precarious, or that the worker feels that the remuneration is not sufficient. In this sense, the person faces a significant feeling of uncertainty about their future work, mainly due to the economic insecurity it causes for the individual and their family. Another common phenomenon is anticipatory stress; which means that the worker is constantly thinking about the problems they will have if they lose their job. These thoughts produce them high stress levels, which can be more harmful than the loss of the job itself.

Lack of participation in decision-making processes. The worker has no voice in the company’s decisions, so they have no control over changes in the company. Nor can they decide on the amount and variety of work provided or the speed with which they should perform the tasks. In other words, they have little or no freedom in choosing how to achieve the objectives assigned to them.

Lack of support and recognition. Lack of support from colleagues and bosses, little or no relationship with the bosses, lack of rewards and incentives, social or physical isolation, conflicts among workers.

Without a doubt, psychosocial risk factors are an indicator that workers do not feel well in their company’s working environment. That is why, in Mexico, a new regulation was enacted in October 2018, the NOM-035-STPS-2018, which governs the entire Mexican territory and whose first stage must be applied in all workplaces from October 2019.

NOM035 focuses on psychosocial risk factors and is in charge of encouraging Mexican companies to identify, analyze, and finally prevent risk factors that could harm the mental health of those who work in Mexican workplaces, and thus promote a healthy working environment for their workers.

To identify the percentage of occupational risk of your company, you must apply the reference guides of the NOM305, which are very simple. Also, you can do it through our platform since we currently have them available in our test catalog. These reference guides, in addition to helping you identify the psychosocial risk in your company, will help you take the necessary prevention measures so you can provide a good working environment and guarantee the physical and mental safety of your workers.